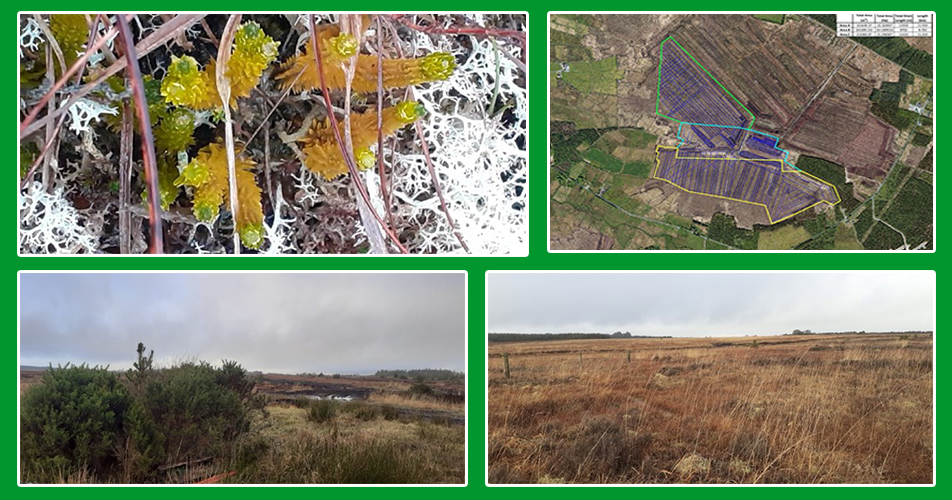 Four drained raised and blanket bogs are being established as exemplar sites for peatland community engagement and community- and landowner-led restoration. These practical examples will be used as demonstration sites to engage with a wider network of peatland-owning farmers and landowners to identify and discuss concerns, ideas and needs that they have and determine viable solutions in order to facilitate restoration work, ‘post-harvest’ uses of their bogs and alternative incomes. This work will also contribute to maintaining and improving the water quality of the famed Moy River and its tributaries as well as restoring a wealth of biodiversity.

Our first pilot project site at Lackaduff, Doocastle, Co. Mayo is undergoing restoration and with our partners in Sisk, the Moy Rivers Trust and Mayo Environmental Network. The other sites are as follows:

• Derryharriff Bog (cutaway blanket bog) runs up to the shores of Lough Sallagher (source of the Brockagh River).

• ‘Grogan’s’ Bog, Kiltimagh – 260 metres from the Pollagh River a tributary of the Moy River SAC.

In addition we are consulting with a network of peatland-owning farmers and farmer organisations to identify other prospective sites to be prepared for restoration work.

Although it is not designated the Lackaduff Bog is only 300 metres south-west of the Cloonakillina Lough SAC (0001899) and is directly north of Derrynabrock and Gowlaun Bogs which are listed as qualifying interests for the River Moy SAC. It is also surrounded by other raised bogs, both intact and degraded, forming an integral part of a wider wetland landscape.

Local Partner : We are partnering with the landowner to facilitate the creation of a local resource for recreation, environmental education and ecotourism.

Length of Drains to be blocked : 32 km in total

8.7 km of drains on section B (outline in blue) and

1.41 km of drains on section C (outlined in yellow)

Restoration of peatlands aims to ‘re-establish self-regulatory mechanisms that will lead back to functional peat accumulating ecosystems’ which is done by achieving two specific objectives:
• 1. Re-establishing a plant cover dominated by peatland species including Sphagnum mosses, and
• 2. Re-wetting harvested sites by raising and stabilizing the water table near the surface.

Biodiversity monitoring methods have been installed to measure achievement of these specified conservation targets, namely, dip wells for monitoring of water table levels and permanent quadrats for changes in vegetation resulting from the restoration process.

Drainage from the site flows into a stream that rises about 50 metres north-west of the site and flows on into the Owengarve River which forms part of the River Moy Special Area of Conservation (SAC) (site code 0002298).

Carbon storage in block C is calculated at about 36,000 tonnes of carbon which will be permanently locked in by the rewetting process. Emissions of CO2 range from section C are currently estimated to be about 20.9 to 37.4 tonnes per year and restoration will reduce this to 8.9 tonnes CO2 per year initially (a reduction of 12 – 28.5 tCO2) and then will start to sequester potentially at 0.5 to 2 tonnes carbon per hectare per year, or 4 – 16 tonnes carbon within the next few years.

Pictured below is the view in a south-westerly direction from the centre of the site across a degraded area of bog just north of Area C (outlined in yellow on the map above). The vegetation in the photo is predominantly Purple moor-grass (Molinia caerulea), Common Cotton-grass (Eriophorum angustifolium) and Heather (Calluna vulgaris).

Raised bog: This is a raised bog most of which is composed of pre-drained bog with parallel drains approximately every 15 metres as well as large blocks of cutover bog in the centre of the site. It is broken into three distinct blocks separated from each other by an access road and the area of cutaway. In a previous survey this was arbitrarily divided into three blocks A, B and C to reflect differences in inherent peat density for the purpose of estimating carbon storage. Area A is 15.89 hectares in size, Area B is 9.95 hectares and Area C is 20.26 hectares.

In Areas A and C many of the drains are blocking naturally bringing the water level closer to the surface so these are a mixture of priority Annex I habitats – *Active raised bogs (Natura 2000 code 7110), Degraded raised bogs still capable of natural regeneration (7120) and Depressions on peat substrates of the Rhynchosporion (7150).

Consequently, the typical hummock-lawn-hollow/pool complex of an intact raised bog is regenerating with Sphagnum cover of over 60% across most of these areas as well as Rhynchosporion habitat in wet depressions and at pool edges.

To the north-east of Area C there are flushes of poor fen with Bog Myrtle, Purple Moor-grass, tall Heather, Lesser Cattail (Typha angustifolia) and Common Reed (Phragmites australis) while towards the east end and south-east and on westwards to about the centre of the bog there are extensive pool areas which support a diverse mix of Sphagnum mosses, heathers, herbaceous species and sedges as well as the liverworts Pleurozia purpureum and Odontoschisma sphagni, the mosses Aulacomnium palustre, Breutelia chrysocoma, Campylopus atrovirens, Pleurozium schreberi, Polytrichum commune, Racomitrium lanuginosum and Rhytidiadelphus loreus and Fir Clubmoss (Huperzia selago).

EU Annex I Habitats present include ‘Degraded raised bogs still capable of natural regeneration (7120)’ and ‘Depressions on peat substrates of the Rhynchosporion (7150)’.

Additional species: Occasional low hummocks of Sphagnum compactum are scattered across the site in drier spots.

Objectives for Intact Bog:
As described above blocks A and C bog are relatively intact with a water table that is near the surface and will be restored through blocking of drainage channels with simple peat dams at the required intervals based on the results of a hydrogeological survey.

Objectives for Damaged Bog:
The remainder of the bog has been significantly damaged by long-term drainage and cutting and in places the bog has been cut down from an average of 5 m depth to as little as 1.5 m. This will require more extensive intervention with deeper blocks.

The site which is approximately 46 hectares in size has almost a full complement of raised bog plant biodiversity so restoration work is expected to quickly result in the full ecological recovery of the site.

This will increase critical areas of active and growing raised bog, a priority Annex I habitat under the Habitats Directive and provide a safe refuge for threatened Irish wetland flora and fauna.

The stream rising to the west is also an area of conservation interest and completion of the project will contribute to the key conservation objective of maintaining the Q5 water quality of the Owengarve River, the River Moy SAC and its species of conservation importance.